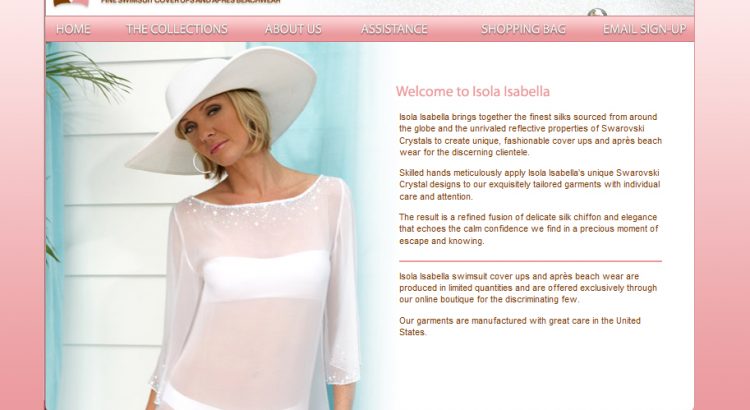 I was contacted by Heather, through a referral from my talented friend, Jason Black in the beginning of March. She had a site for her company, Isola Isabella, that was being designed and developed by another referral of hers, and while he was doing a superb job in most aspects of the project, she determined that it may be more beneficial for the look she was trying to achieve to have a female work on her design.

Heather knows her market, and knew the style she wanted – upscale, luxurious and clean. After about a week, I came up with a few ideas, and those have since been tweaked to perfection giving her just what she needed.

This project involved the design of the new look, XHTML and CSS coding, and theming of a 1shoppingcart.com ecommerce package that Heather has chosen for her product management.

this site is ARCHIVED

I guess I will have my work cut out for me! I just got the support ticket from WebQuarry answered, and they said:

It isn’t that it is messed up but that we moved to php5 and it handles includes a little differently.

Specifically, you can’t give external paths like that to an include file anymore. Give a relative path instead.

This is going to take me quite a while to recode all these pages in my site to use a relative path. Grrrrrr!

Web Technology Penetration Report – CSS continues its rise and frames still survive in 16% of websites! by ZDNet‘s Richard MacManus — I came across an interesting report of web technology penetration rates, dated 1 April 2006, by Security Space. It’s based on a sample of 1,358,991 web sites in 2006, so it’s a pretty significant study. The following table shows the penetration rates of a variety of client side web technologies, for the years […]

CSS has a 50% penetration rate… I like to read that!

I remember the first day that I saw the CSS ZenGarden (the inspiration that drove me to perfect layout with CSS). Changing from table based layout to CSS was new and different and worth every hour I spent. I am so glad that I learned when I did – and my clients thank me now for it. I have re-aligned redesigns several times over the years 🙂

I was Zenful Creations in 1997, and took to the web as such (by actually using the URL and not a “free web host”) in March of 2003 – I will not tell a lie that being “CSS” and “Zen” “with a garden/plant” on the main page, did not fare my company well over the years. It did. CSS Rocks.

All themes must be submitted by May 1, 2006, 12:00pm PST. This will allow enough time for everyone to re-submit their themes. It will also allow time to find a qualified panel of judges for the competition.